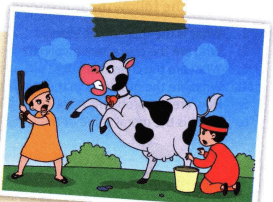 There were two brothers named Ali and Abe. Their parents had passed away and their father left them a cow and a date tree to share with each other. Ali and Abe had different personalities because Ali was cunning and greedy while Abe was kind and honest.

One day, they intended to share their possessions equally and Ali told Abe that he would fairly divide them. Ali decided that he would get the hind side of the cow and the upper part of the tree and the rest belonged to Abe. Ali said, “We are only able to get the benefits from our parts.” Abe kept quiet without a word in response to Ali but he did not dispute his brother\s decision.

Abe was so diligent that he fed the cow properly until it became healthy and could produce a lot of milk. The one who sold the milk was Ali and he did not share a penny with his brother from the sale. Abe asked for his share but Ali said, “I get the benefit from the hind part of the cow but you can\t.” Abe did not say anything.

Abe had the idea of beating the cow while Ali was milking it. He did so and the cow started kicking. Ali got angry with Abe and said, ”I can do anything with my portion and we had agreed on that.” Eventually, Ali decided to share his money with Abe but his brother also asked him to share the work of treating the cow. Ali agreed to that.

After that, Ali did something bad again, taking all the profit from the sales of the juice from the date tree, since it was obtained from the upper part of the tree. Abe then tried to cut the tree while Ali was fixing pots for the juice at the top of the tree. Ali asked him not to do that but Abe said that the part belonged to him and he could do anything with it. 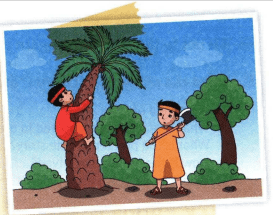