Once upon a time there was an old couple who didn have a child. They lived in a small house near the village forest. “Please give us a child,” they asked God everyday.

One day, from the household Shinto altar, they heard a cute cry, “Waa! Waa!” 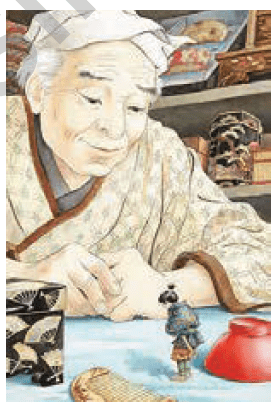 They looked and saw a crying baby who looked just like a little finger. “This child must be a gift from God. Thanks to God!”

“We will call this child \Issumboshi\,” they said.

They raised Issumboshi with much care, but Issumboshi never grew bigger.

“Hey, Issumboshi, do you want to be eaten by frog?” Issumboshi was always being bullied by the children of the village and often went home feeling unhappy.

Grandmother would make some big rice balls and encourage him. “Eat a lot, and grow up quickly,” Gradnmother said.

One day, Issumboshi said, “I will go to the capital to study and become a respectable person. Then I will come back.” Grandfather and Grandmother were worried about him, but Issumboshi\s mind would not be changed. At once they began to prepare for his trip.

Issumboshi sheathed a needle sword in a straw case, put on a cup for a sedge hat, and started out with a chopstick staff, in high spirits.

“Is he safe? With such a small body?” Grandfather and Grandmother asked as they saw him off.

Issumboshi went on the trip with a big wish in a small body.

At last Issumboshi reached the capital city and anchored under the bridge. Then he climbed up to the railing and viewed the town.

“There is a fine palace over there. I shall ask them at once,”

At long last Issumboshi arrived at the palace.

“Excuse me, but I want to meet the feudal lord.”

The lord came to the door, “What? Who\s there?”

“Please let me be your retainer.”

“I wonder if your small body can do anything.”

“I\ll stay in your pocket and guard you from all harm.” When Issumboshi said so, a bee came buzzing by. “Yhaa!” Issumboshi yelled, stabbing the bee.

“Bravo! I employ you. It would be good if you became the Princess\s man.” “Oh! What a cute fellow he is!” said the Princess, puting Issumboshi on her palm.

“I will defend you upon my life,” said Issumboshi.

The Princess liked Issumboshi, and she taught him reading, writing, and various studies. Further, Issumboshi practiced fencing very hard in order to be strong.

Issumboshi jumped at the demon and stabbed his eyes. The remaining demons were frightened. They ran away in great haste, but one demon, who was left behind, trembled while holding the magic hammer.

“Do you want me to stab your eyes, too?” Issumboshi asked.

“Please, don. This is the magic hammer that will grant you a wish. I give it to you, so please spare me.” And saying this, he ran off in a hurry.

“Thank you, Issumboshi. You saved my life,” the Princess said.

“Princess, please wave this magic hammer and make a wish that I may become big,” said Issumboshi. The Princess waved it and asked, “May Issumboshi become big!”

And then, strangely, before her eyes, Issumboshi began to grow. He grew into a nice young man. They went back to the palace, and the Princess asked the King to let her marry Issumboshi.

The Princess and Issumboshi then got married, and they invited Grandfather and Grandmother to live with them in the palace. They lived happily ever after.

1. Do you know the function of each part of a story?